The church is first mentioned in manuscripts in 1259 as „capellanus in castro“ and as „capelle uf der borg“. The church was inaugurated in honour of the patron saint Panthaleon and St. Anna, and has borne these names up to now. Since later on only reconstructions and acquisitions have been mentioned, the church must have been situated in the north-western part of the castle circle, that is, in its present location.

Since religious services in the castle church were originally held for the counts’ whole household (including servants), count Graf Christian Ernst founded a castle parish by the decree of 5th of February, 1716. This included all the count’s servants, together with those, who lived in the town. This castle parish legally existed until 1952.

According to available information, the last construction works in this church took place in 1817. It was provided with new arrangements on the occasion of the three-hundred-year jubilee feast of the Reformation and remained unchanged in its baroque shape until demolition in 1870.

Today’s church was built during the last great reconstruction of the castle (1863-1885) in the commission (since 1890) of prince Otto zu Stolberg-Wernigerode (1837-1896), and located in the same place as the previous baroque building between 1870 and 1880. The castle architect Carl Frühling (1839-1912) built this church taking into account the drafts of the remarkable Viennese architect Friedrich von Schmidt (1825-1891). At Easter 1880, on the 4th of April, the castle church was solemnly inaugurated. Count Otto zu Stolberg-Wernigerode (1837-1896) conferred upon the architect Carl Frühling (1839-1912) the title “castle reconstruction councilor” for his services in the building of the church. On the 6th of April, the confirmation of the hereditary prince Christian Ernst zu Stolberg-Wernigerode was celebrated in the castle church.

Today’s castle church is a historical hall church with built-in galleries, although its size was conditioned by the limitations of the locality. The choir polygon is decorated with stained glass windows designed by the artist Carl Christian Andreae, who later lived in Sinzig in the Rhineland. The interior of the church is determined by the neogothic alter and the pulpit, both made of French limestone. The niche figures on the alter and the pulpit were completed by the sculptor Karl Dopmeyer (1824-1898).

Nowadays the church can be seen in its original state. It is also often used for concerts or for  weddings, during which the guests can hear the Walker organ dating from 1877.

Back to the history overview. 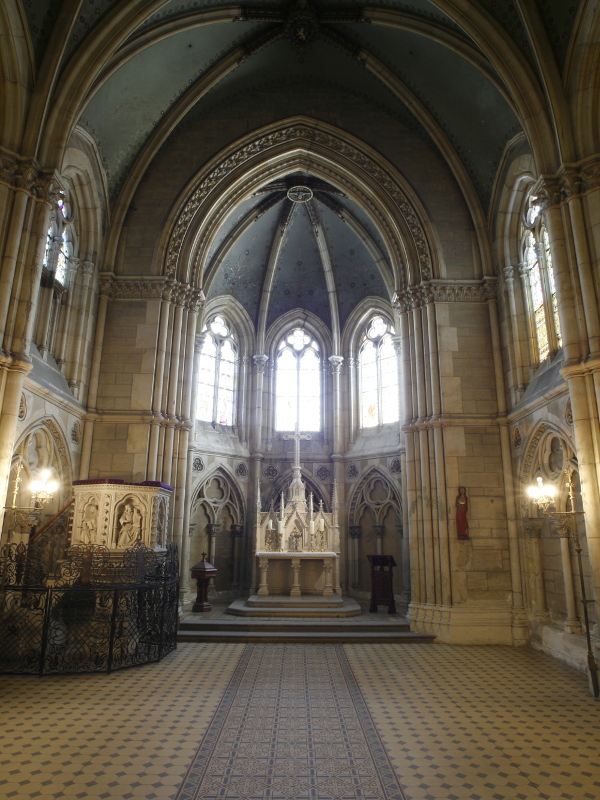